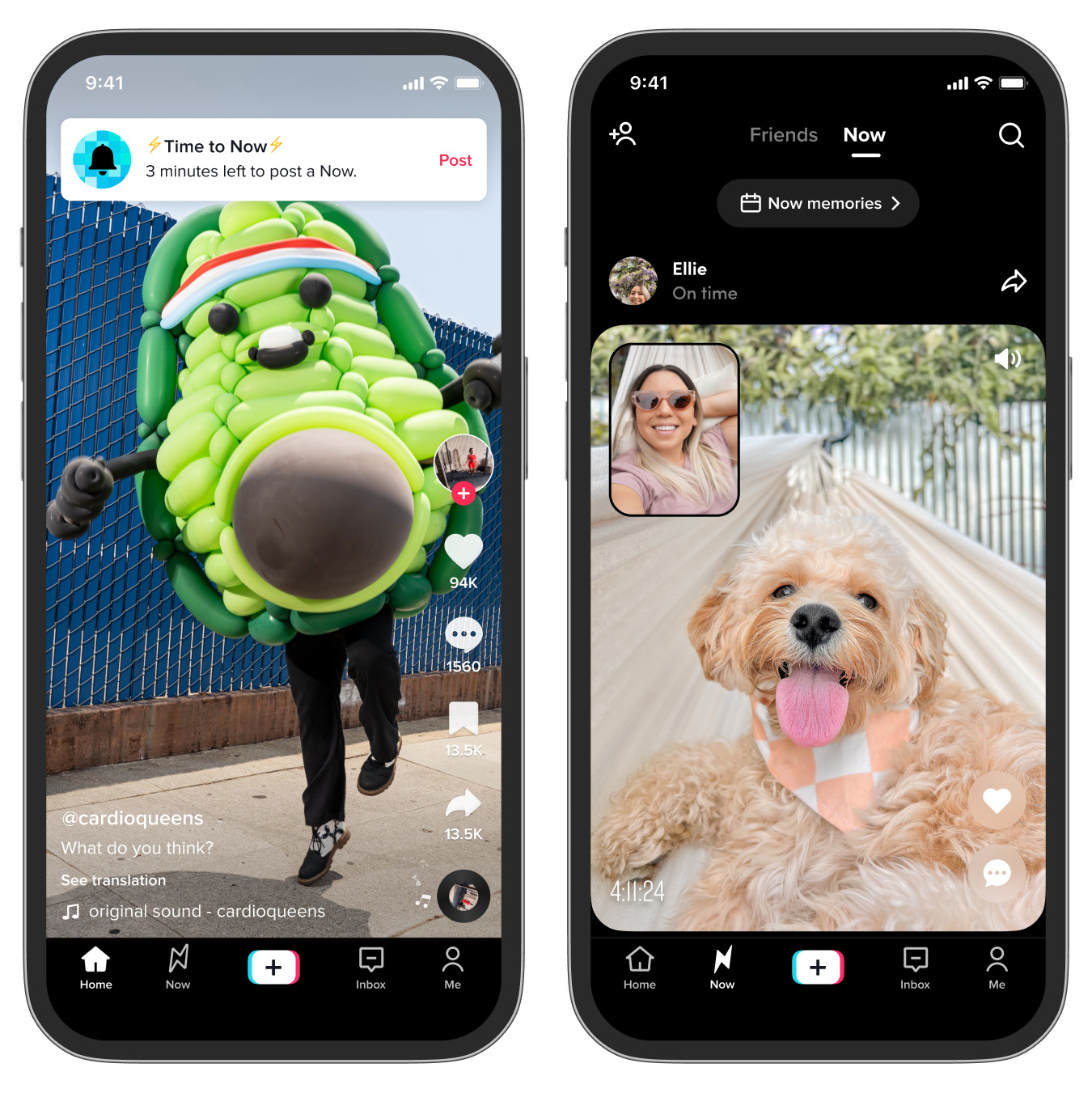 If you find the new TikTok Now app familiar, you’re not wrong. TikTok has essentially created a clone of another increasingly popular app, BeReal, where users are prompted every day, at a random time, to take a picture with their front and back phone cameras. Aside from a few features, the biggest difference between the two apps is their name. Here’s everything you need to know right now.

Read more: TikTok not working? Here’s how to fix it

In the US, TikTok Now is a new feature of the TikTok app that sends you and your friends a daily notification to capture a video or a photo using both front and back phone cameras to share what you’re doing at the moment quickly. Outside the US, TikTok Now has been rolled out as a standalone mobile app for iOS and Android.

What is TikTok Now?

To understand TikTok Now, we first need to discuss a different social media app called BeReal. BeReal is a popular French social app that came out in 2020 based on the idea of authenticity. Basically, it prompts users to take an unfiltered photo using the front and back of their camera at a random time of day so people can see where they are and what they’re doing. There are no filters and no time to stage a scenic snapshot. Not the best app if you’re having an affair or heading organized crime, but other than that, it gives friends a more realistic window into their day.

They say imitation is the sincerest form of flattery, but it’s hard not to call TikTok a copycat in this case. Seemingly, the main difference is that BeReal is strictly for photos, while TikTok Now allows users to choose between taking a static photo or a 10-second video. Also, TikTok Now gives users three minutes to post versus BeReal’s two minutes, perhaps leaving you a little extra time to ensure your hair is nice.

TikTok is still “experimenting” with the new feature at the moment, meaning TikTok Now can be accessed via the TikTok app in the U.S. In other areas of the world, however, TikTok Now may appear as an entirely separate app. See the next section for how to use TikTok Now, depending on where you live.

How to use TikTok Now

TikTok Now, the feature, is available for US users. With the most recent update, you will find the Now button along the bottom navigation bar, next to the posting button. Tap the Now button (lightning icon) to see an Explore Feed of TikTok Nows — or, as TikTok calls it, “a daily photo and video experience” — from the “people who matter the most.” In plain English, this means Now posts that are trending or those from mutual followers.

After activating the new feature, you will receive a daily prompt to capture a 10-second video or a static photo to share what you’re up to. Users must be 18 or older to share their TikTok Now posts on the Explore Feed. For users 13 to 15, only your friends (people you follow who follow you back) will be able to see and comment on your posts. See how to change your age on TikTok if your account settings aren’t correct.

In regions outside the US, TikTok Now is available as a standalone app. The app works a lot like the TikTok Now experience currently baked into the TikTok app within the US. But, as a separate mobile app you must download, it allows users to opt-in to receive push notifications for check-ins. This is handy if you prefer your TikTok app notifications silenced but want to be alerted of new Nows.

Whereas BeReal alerts its users via push notification, telling them that “it’s time to BeReal” with alert emojis, TikTok Now’s notification is similar, alerting users its “Time to Now” with lightning emojis. Different window dressings for the same function.

Since launching the app on September 18th, 2022, TikTok Now has reached the top 100 iPhone Social Networking apps in five markets; Madagascar, Mozambique, Kenya, Malta, and Singapore. BeReal already has nearly three million people using the app daily, so time will tell whether or not TikTok Now can catch up.

It shouldn’t be a surprise that TikTok is attempting to cash in on BeReal’s fame; top companies are always taking inspiration from one another or introducing comparable features. For example, YouTube Shorts imitated TikTok’s short-form portrait-styled videos. TikTok may be the first, but we doubt it will be the last to cash in on BeReal’s trendy feature.

Read more: How to make TikTok videos: A beginners guide

Yes, click on Memories from your profile page and select the calendar date of the post you wish to delete. Tap the three-dot icon above the post and select Delete.

TikTok Now will send you a notification every 24 hrs, but there is no exact time or schedule. If you haven’t opened the app for a while, you will likely receive a reminder notification sooner.