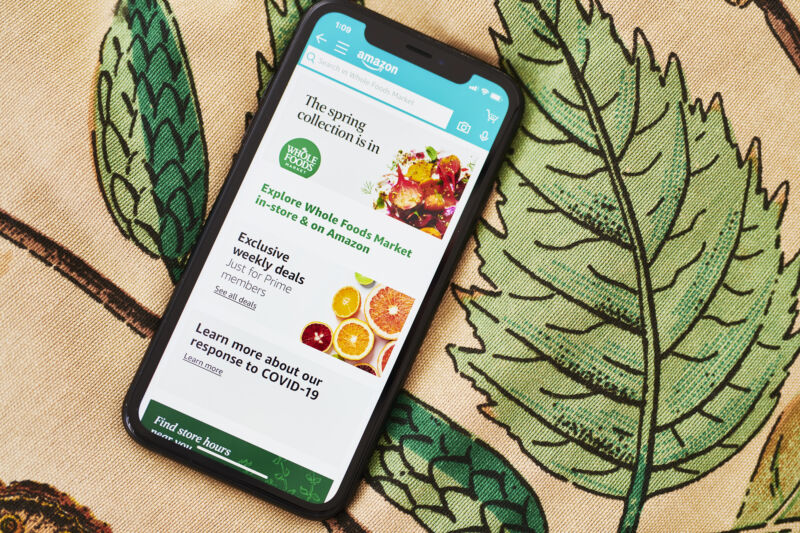 As many consumers stay at home, limiting themselves to online shopping only, Amazon—already the default online “everything store” for millions—has been reaping the benefit. But even the massive conglomerate can’t keep up with consumer demand for groceries, home essentials, and everything else. In an attempt to catch up, it is both going on a hiring spree and limiting new customers.

The company said today it will be hiring an additional 75,000 part- and full-time employees for its businesses in the coming weeks to try and meet demand. That’s in addition to the 100,000 new workers the company hired for its warehouses, logistics, and grocery businesses through late March and into the first weeks of April.

The company also said it will allow third-party sellers to resume shipping “non-essential items” through its Amazon fulfillment service later this week, The Wall Street Journal was first to report. Even with up to 175,000 additional people trying to get goods from Amazon to shoppers, though, the company asked for patience from its customers. In addition to warning of delays for orders placed by Prime members, Amazon is now also closing grocery orders to new customers for the time being.

Amazon has increased Whole Foods online order capacity by more than 60 percent since the beginning of the COVID-19 crisis. The online giant also expects the combination of “restricted capacity due to social distancing” together with increased demand will keep it “challenging for customers” to find open delivery slots.

“If you are able to do so safely,” Amazon concluded, “We kindly encourage our customers who can to shop in-person.”

Employees are not immune

Amazon touted its dedication to “the health and safety of customers and employees” in its announcement limiting grocery orders. For several weeks, however, Amazon employees have been publicly criticizing the company’s response to the threat COVID-19 poses to its own workforce.

Employees at more than 100 Amazon warehouse locations have reportedly tested positive for the COVID-19. Federal officials began an investigation into one Pennsylvania warehouse last week following complaints from workers that the company was not taking the threat of the disease seriously enough.

Small groups of Amazon workers have staged walk-outs and other protests at several of the company’s locations in recent weeks. The company fired the leader of one such protest, Chris Smalls, first saying the termination was unrelated to the organization effort. Later, however, a leaked memo was made public in which Amazon’s general counsel tried to scapegoat Smalls, writing, “He’s not smart, or articulate, and to the extent the press wants to focus on us versus him, we will be in a much stronger PR position than simply explaining for the umpteenth time how we’re trying to protect workers.”

Amazon says it has stepped up its response to the virus, and the company is deploying more masks and gloves to workers. Last week, Amazon said it is launching its own testing program for employees, though it will take time to scale up. Despite these efforts, however, many employees have told media the changes feel like too little, too late.

“Were they slow? Yeah, definitely,” one employee told The Verge. “The only reason they’re doing this stuff is because we blasted them in the media.”

BuzzFeed News also reported over the weekend on “widespread confusion” among Amazon employees who are trying to receive compensation for time they spent quarantined due to COVID-19.

Amazon’s publicly stated policy promises two weeks’ pay for anyone who contracts the virus or is quarantined: “If someone is diagnosed or comes to us who is presumptively diagnosed (but unable to get a test), we are giving them extra paid time off. In addition, we are also contacting people who have been in close contact with a diagnosed individual and giving them time off as well, for 14 days, to stay home with pay.”

That hasn’t proven to be the case, employees told BuzzFeed, with both HR employees and hourly workers unsure when the new policies apply. One told BuzzFeed that trying to get the back pay he is owed requires “jumping through one hoop after another,” adding that he thought the policy was “really just a public relations thing.”