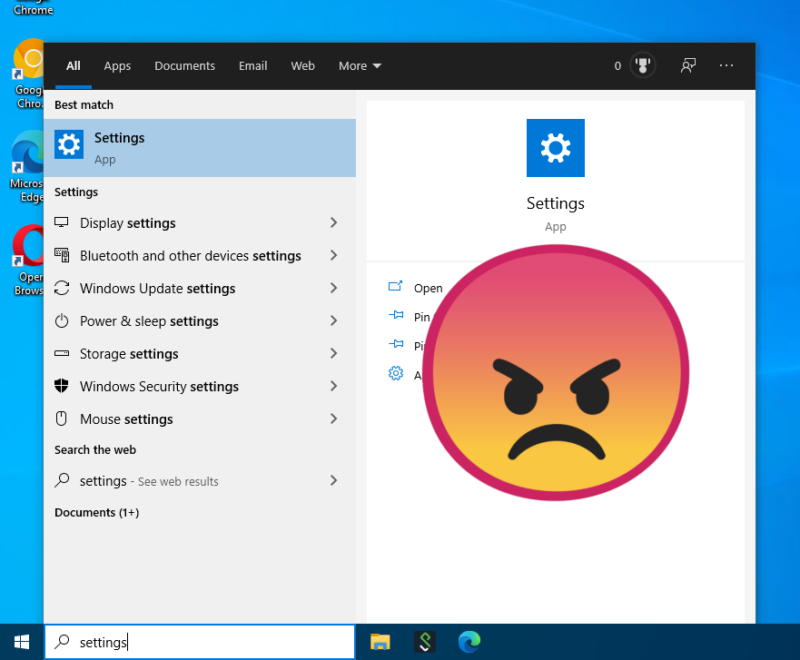 You may have seen dark rumors around the Web that Microsoft is about to kill off the classic Control Panel. Rest assured, friend, we were as horrified as you are—but on more careful inspection, this seems not to be the case.

For about eight years now, Microsoft has been trying to pry everyone loose from the Control Panel and guide them gently to the newer Settings applet instead. They’ve encountered strong resistance in doing so, particularly from systems administrators and support technicians. For one thing, the newer Settings applet is a single-instance interface—you can’t have Settings open for, say, printers and the network at once. Pick one.

Microsoft also hasn’t done a very good job of making the newer Settings interface very pro-friendly. The focus on greater simplicity often comes at the expense of information density and the ability for those who know what they’re doing to complete tasks rapidly.

One of our favorite pet peeves is Printers & Scanners, the Settings replacement for Control Panel’s Devices and Printers. You can add a new printer from either dialog—but most likely, the automatic network scanner won’t find the printer you’re looking for. In the example above, there’s a perfectly valid HP LaserJet 4050N on the same LAN. To our distinct lack of surprise, Windows never found it without help.

This leaves a sysadmin or helpdesk tech expecting and relying on the little blue “printer I want isn’t listed” link nine times out of ten. In the older Devices and Printers, that link—which pops up the dialog allowing you to specify a hostname or IP address for the printer you want to add—is available immediately. In the newer Scanners & Printers, the link is still available… but it only appears after a timeout interval, with no countdown.

Similarly, the ability to right-click a printer and check its Properties and/or Preferences is gone. So is the ability to double-click it to open its queue. Right clicking no longer does anything; single-clicking produces new buttons “Open queue” and “Manage.” Manage does not, itself, do anything useful—it takes you to a new dialog, and in the left-hand side of that dialog, you’ll find the same options you would have gotten simply by right-clicking the printer itself in the older interface.

Most of the papercuts in Settings are of a similar nature: nothing a typical user is likely to notice but intensely frustrating for people who spend their days manipulating the interface and know exactly what they’re doing when they do. Which is why many IT professionals—myself included—were ready to hit the panic button when rumors popped up that Microsoft had introduced a new Feature ID in the latest build of Windows 10 which would hide away the Control Panel entirely.

Testing the feature ID in question

Developer Rafael Rivera does a lot of poking at new Windows builds. He designed an open source application called mach2 which allows a user to enable or disable Windows feature IDs directly. Hold on—what’s a feature ID? Rivera explains it himself:

Feature Control is a system used to gate off new and unfinished features from production users in production code. The latter bit is important; it helps teams—like the Notepad team—safely work on changes in a constantly evolving master codebase, reducing costly integration efforts and boosting transparency. Teams needing to work with this pre-production code can easily flip a switch on their Windows machines—like Feature_FluentNotepadWorkForMaryJo. Everyone else, however, would continue to use production code and be none the wiser.

Using mach2, it’s trivial to turn an otherwise hidden feature ID on. This allows users to look behind the curtain at features Microsoft has implemented—fully or partially—but hasn’t enabled yet in production.

Users should be aware that playing with mach2 falls firmly into “don’t try this at home, kids” territory, though—the hidden features it exposes aren’t documented in any way, may not be fully tested, and in fact might not be safe to run at all.

When Rivera started playing with the newly exposed HideSystemControlPanel and friends, he discovered that it toggles the display of a particular filesystem GUID, BB06C0E4-D293-4f75-8A90-CB05B6477EEE. Even without mach2 installed, curious users can see that the GUID opens the System applet of the Control Panel.

The impact of a missing System

Although losing System is a lot better than losing the entire Control Panel, it’s still a case of giving up a far more capable interface for one that… well, actually we’re not sure what System’s replacement in Settings has going for it.

System is, in and of itself, fairly useless—it’s most frequently used simply as a springboard to get to an arbitrary collection of functions available beneath it. Joining an Active Directory domain is one of the more common of these functions.

This is another example where the best thing you can say about Settings is “well, it works, for the most part.” The collection of advanced functionality in the old System applet is admittedly rather arbitrary. But in our opinion, “Access work or school” isn’t any better.

The target market for this functionality isn’t a stumbling end user in the first place; domain joins are by necessity done by the IT professionals who already have privileged Active Directory accounts capable of adding new machines to the domain. These IT professionals don’t need the “domain join” terminology dumbed down—it just makes their lives more difficult.

What’s worse, valuable functionality is lost even once the right place in Settings is found. Using the old System app, if the logged-in user doesn’t have local Administrator privileges, a UAC elevation dialog is presented when Change settings is clicked. Under the new Settings dialog, the necessary functionality is simply missing, with no hints given. The only way to get the functionality back is to log in to the entire system with a privileged account—you can’t even right-click Settings and Run as Administrator.

The classic Control Panel, thankfully, does not appear to be leaving—yet. But it’s hard not to be concerned about Microsoft’s apparent determination to kill it eventually, even if that death is by thousand cuts rather than the guillotine.

We really wish Microsoft would do more to fix Settings’ odious problems where IT professionals are concerned instead of simply testing ways to remove the older, considerably more functional interfaces. There’s plenty of room to clean up and organize Control Panel’s clutter without dooming professionals to deal with loss of functionality.